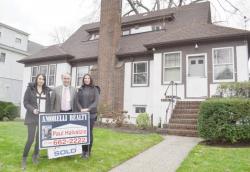 Paul Halvatzis of Amorelli Realty has sold a historic home in the Broadway-Flushing neighborhood. The Ferrigno family who are the founding members of the Broadway- Flushing Homeowners Association previously owned the home, originally built in 1923. Located at 33-37 163rd St., the property is overseen by theNational Trust for Historic Preservation in Washington, DC.

The goals of the association were to protect the integrity and appearance of the north Flushing area and maintain the Rickert-Finlay Covenant of 1906. The intent of the association also was to try to establish Flushing as a designated historical district. The home still retains much of the original woodwork and architecture from when it was originally built, more than 90 years ago. It is also adorned with a plaque which reads, “Broadway-Flushing has been placed on the National Register of Historic Places by the United States Department of Historic Places by the US Department of the Interior and the New York State Register.”

“We are really excited about this and it is a real good outcome for this home,” said Shantia Anderheggen, Director of the Easement Program for the National Trust for Historic Preservation.

The area of Broadway-Flushing was developed in 1906 by the Rickert-Finlay Realty Company, a major real estate development firm that also developed Bellcourt (1904) in Bayside, Douglas Manor (1906) and Westmoreland (1907) in Little Neck.

The National Trust, in recognition of the company’s experience in successfully selling historical properties, honored Halvatzis, along with Christina Halvatzis and Lauren Cornea. Other accomplishments include theSteinway Mansion and the DeRose Pharmacy Building.

The identity of the neighborhood comes from the former name of Northern Boulevard, which was once known as Broadway. Houses in Broadway-Flushing reflect many classic Revival styles from the Eclectic Period, most commonly Colonial and Tudor, as well as Arts and Crafts, American Foursquare and Art Deco, on relatively large properties. In order to preserve the park-like character of the neighborhood, the developer placed restrictive covenants on the properties that ban front yard fences, front yard garages and flat roofs, among other restrictions.

For more information on the home, visit www.amorellirealty.com.