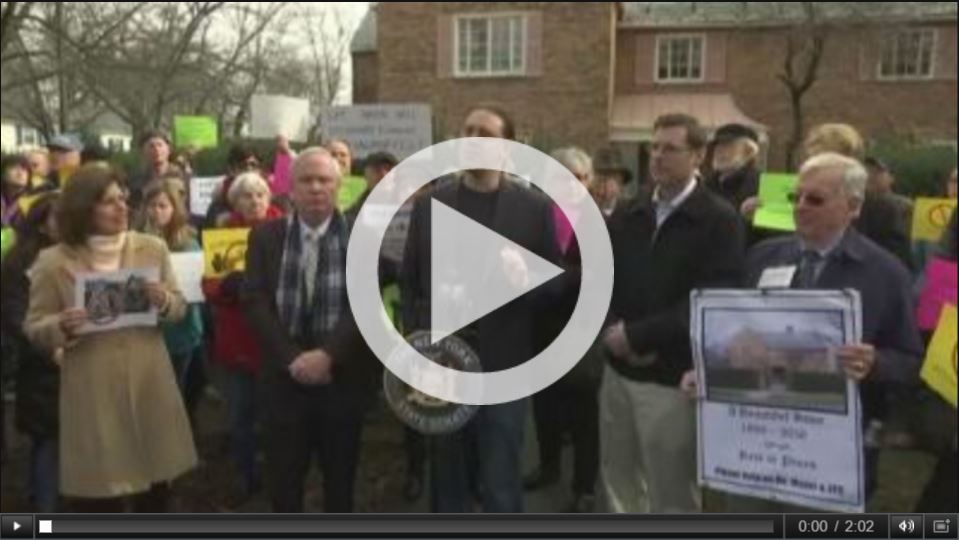 Community leaders are calling for landmark designation to save historic homes from development in Flushing. NY1’s Clodagh McGowan filed the following report.

While walking around the Broadway-Flushing district, you might forget you’re in Northeast Queens.

“We’re not on Long Island! We’re not standing in the middle of Westchester or Connecticut. We are in Broadway-Flushing. Queens, New York,” said Maria Becce, the vice-president of the Broadway-Flushing Homeowners’ Association

The desire to save that suburban feeling in the middle of New York City is what brought out nearly 200 residents Saturday.

Residents say developers are tearing down homes, some dating back to the early 20th century and building McMansions that don’t fit in with the character of the neighborhood.

“They paved paradise and put up a parking lot,” said Janet McEneaney of Community Board 11.

The latest example is this 1930’s Tudor Revival home on 157th Street and 32nd Avenue. It sold for almost $1.5 million in October.

Department of Buildings plans show the home will be completely demolished.

Lawmakers are calling on the Landmarks Preservation Commission and Mayor de Blasio to grant the neighborhood landmark status.

“The longer we wait, the longer we continue to see homes torn down and in their place we see ugly monstrosities,” said Assemblyman Ed Braunstein.

“And it’s just a shame that the city will not step up and help them,” said State Senator Tony Avella.

The Landmarks Preservation Commission found the Broadway-Flushing district ineligible for land marking back in 2007. The agency says 70 percent of the buildings were non-contributing or altered. And there’s a lack of quote strong architectural significance. But residents say that’s not true.

“It’s nonsense. These buildings have tremendous integrity and when they have been altered, they’ve been altered with the same materials that we already there,” said Paul Graziano, a local historic preservation consultant.

A spokeswoman for Mayor de Blasio says the office is looking into the matter.

“That might be a good solution to stop these teardowns; you’re getting rid of history,” said Brostek.

And that’s something that can never be replaced.

Next post: Thanks to All for Attending the Rally! Our Message Was Sent Loud and Clear to Mayor DiBlasio!